Breakfast at the Beach (It’s not what you think!) 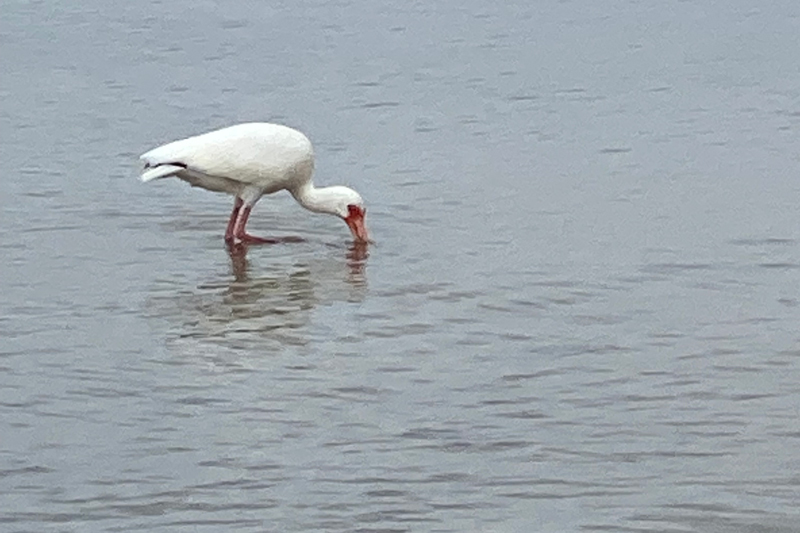 For writers, it’s important we periodically refresh our minds — or our muses, as they say. And so, a few times a year I leave my Sonoran Desert home for a beach in the Gulf of Mexico. I do miss my scaly and furry family members, but long strolls on the beach do me a world of good. Sunrise is my favorite time for a stroll. Fewer people are at the shore, but more importantly, it’s when birds are hunting for their breakfast.

One morning, a white ibis, Eudocimus Albus, and sanderlings, Calidris alba, ignored me as I ambled by. They were intent on a few tasty morsels. I’m not sure what they were consuming, but I’m sure I wouldn’t have liked it. I certainly wouldn’t have enjoyed it as much as they did. 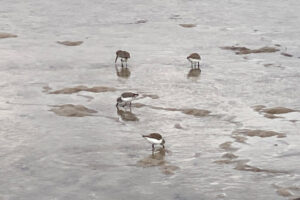 Further along, quite a few pelicans were gliding and diving. But one brown pelican, Pelecanus occidentalis, had finished with his feast and sat on a sign to dry his wings. I paused to take a photo, and he patiently obliged. 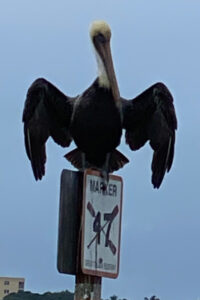 As I walked on the edge of the water, I did my best not to disturb the shorebirds. I never mean them any harm and would never willingly interrupt anyone’s breakfast. Sometimes they ease away, sometimes they pretend I don’t exist, but inevitably a few fly away, squawking their disapproval as they go.

Strolling with a Heron

Another morning, as I enjoyed the soft sand underfoot, I watched a little blue heron, Egretta caerulea. We walked side by side for a time, and I checked to make sure I wasn’t disturbing him. He didn’t increase his pace or move away in any way. He didn’t lean forward, wings out, as if prepping to take flight. I was pleased that my company didn’t seem to stress him. 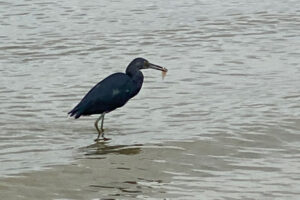 Eventually, he caught a fish. Catching one of those wiggly things takes effort. I paused, wanting to be certain I didn’t cause him to lose it. Positioning the fish so it’d go down headfirst was tough enough; he didn’t need to worry about humans getting too close. Once the heron swallowed his fish, we continued our stroll a bit further.

The apparent comradery made me wonder: what did the bird think of me? Did the heron know I was a mammal, not a bird? If he did, would that have changed his opinion of me? Like many mammals, I could have been a predator – except they, like foxes and coyotes, walk on four legs. Then again, many of the heron’s predators come from the sky (hawks) or the water (alligators). Maybe the heron had seen enough humans to know we weren’t dangerous unless our behavior changed, like lunging or throwing shells. And how did he know I didn’t want that tasty morsel of a fish he’d caught?

Could I have been another strange bird? After all, we both walked on two legs. Large birds were in the area, but pelicans are usually interested in larger fish. Then there’s the wood stork, Mycteria americana, which do eat fish, along with frogs, insects, and even crabs they find in shallow water. I certainly didn’t look like any of these birds.

Due to my friendly demeanor, perhaps the heron thought of me as an honorary bird? Sure, I’m rather odd-looking with my feathers flat and fused in cloth. A few bare skin patches were present, but it’s also a common trait in birds. My toes, however, weren’t webbed.

In the end, we went our separate ways. However, I’d still like to know what he thought of his breakfast companion…