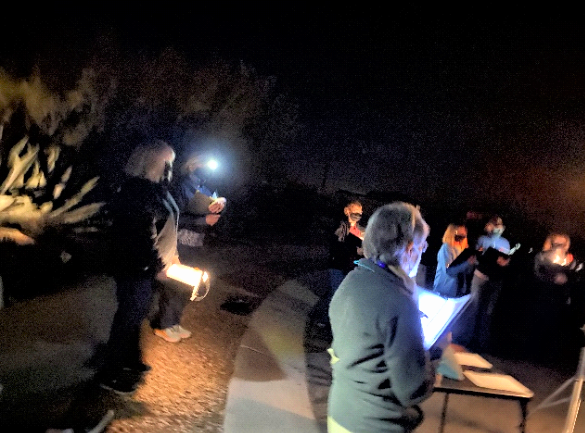 To maintain safe social distance, my chorus has been meeting outside in a neighborhood cul-de-sac.  We’re masked and standing six feet apart. We meet after dark and we each bring an illumination device, such as a clip-on light, or a head lamp or maybe even a wrap-around flashlight you wear on your neck. Whatever type we use, it only illuminates the music we are holding – even combined they do nothing to dispel the darkness around us.

One of the chorus members brings her service dog with her. He sits quietly at her feet, usually gazing into the darkness behind us. But every now and then, he’ll growl, sometimes barking at something unseen behind us. 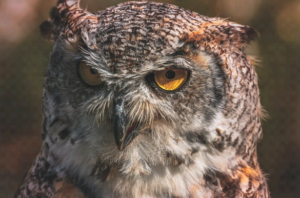 What is in the darkness? One of the usual nocturnal desert creatures? Perhaps a Great Horned Owl, a coyote or a Gila Monster.  We stop, look and listen, but the intruder is not identified.

Of course, my murder-mystery-writer’s-imagination suspects it isn’t merely an ordinary animal, but something much more sinister. Is it one of the infamous el chupacabra? Or perhaps a thunderbird? Maybe it is merely a ghost or evil spirit.

Chupacabra translates to “goat sucker.” The story goes that sheep and goats were found with puncture wounds in their chests with their blood drained out. Initially, descriptions were of a reptilian creature with spikes. Red eyes and fangs enhanced its fierceness. However, more recently the chupacabra is described as a breed of wild, hairless dog with a prominent ridge and, of course, fangs.

Or it might be a Thunderbird. I like large birds, but none of them, not even the golden eagle, can produce thunder from its wings and lightning from its beak. In some story versions, the feathers are knives. In the Sonoran Desert, my neighborhood, the thunderbird lived in a mountain cave. From its lair, the creature preyed upon Pima Indians, including men, women and children. Fortunately, the Pima warriors were able to defeat the thunderbirds.

So far, our chorus has emerged unscathed by the unseen dangers. But I’ll continue to be on alert, along with the canine chorus member. He’ll do his best to protect us, and I’ll fight by his side–even if it’s only a kangaroo rat.

Book Note: I weave science into adventure tales, figuring if the learning is fun, the knowledge will stick. I’ve created three adventure series, Curtis Curly-tail Lizard, the Lime Lizard Lads, and Clarissa Catfish. The characters do not stay at home, they make mischief, and they have to face dangers–with the science of the animals and their ecosystems written into the stories. I hope you’ll check out these adventure tales today and weave some fun science into your children’s lives. See the book descriptions by clicking on the links below.