Fossil Iguana Burrow in The Bahamas? 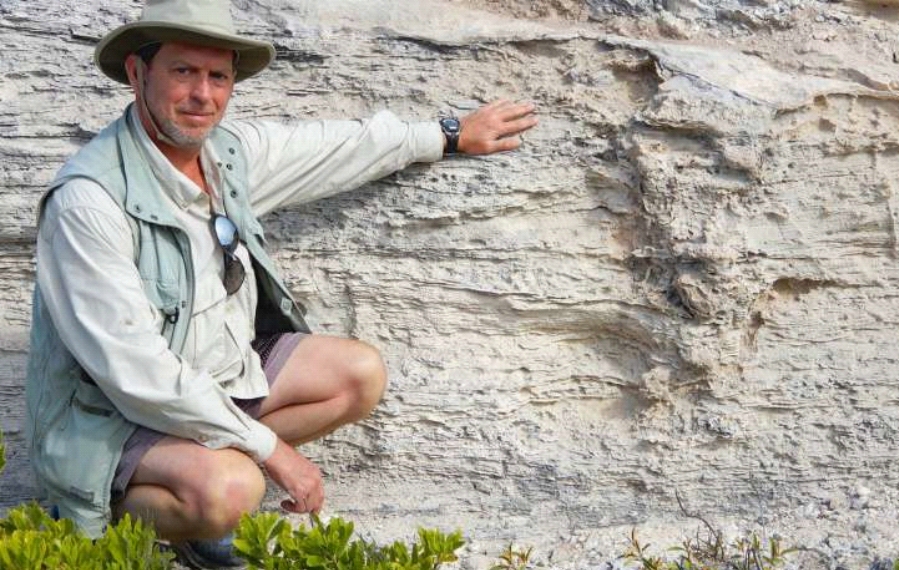 Even though Rock Iguanas (Cyclura nubila caymanensis) make their dens and escape holes in the limestone karst of the Caribbean islands, the females still need sand to lay their eggs. Females dig a burrow tunnel, lay their eggs in a chamber, then back fill it in—the iguana mothers cover over the entrance area to hide the presence of the eggs. I have watched females dig their dens and after their concealment efforts, I was unable to find the burrow entrance. Once the eggs hatch, the baby iguanas dig their way out of the tunnel to the surface. 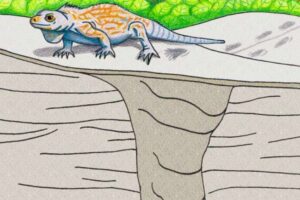 Illustration shows a cross section of the prehistoric iguana burrow, and how the surrounding landscape may have looked during the Late Pleistocene Epoch. (Credit: Anthony Martin.)

Anthony Martin is shown at the top of the page next to the trace fossil of the Pleistocene iguana burrow. (Credit: Melissa Hage.) The fossilized burrow dates back to the Late Pleistocene Epoch, about 115,000 years ago. The island still has iguanas, but they are critically endangered.

“After further investigation, Martin and his co-authors determined that the trace fossil he noticed on the limestone outcrop was that of a nesting iguana burrow. Ample evidence, including a nearby fossil land-crab burrow discovered by Hage, showed that the outcrop was a former inland sand dune, where iguanas prefer to lay their eggs.”

It is reasonable to assume fossilized sand dens would both be difficult to create and to be discovered, so if this is an ancient iguana nesting den, it is very exciting. Several iguana researchers doubt the conclusions of the authors, however. One point in question is that iguanas’ nesting dens are not dug straight down – they angle down slightly from the surface until the desired incubation temperature is found. They nesting chambers are not dug straight down as they appear to be in the fossil.

But that’s the great thing about science. Ideas are proposed and then evidence for and against the conclusions are presented and discussed. 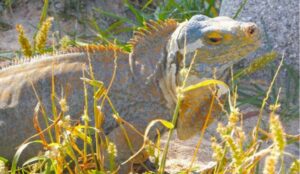 One conclusion is certain: The San Salvador Rock Iguana is critically endangered. Hopefully, the current population can be preserved and not become known only as a fossil species.

For more information on iguanas and lizards and tortoises and turtles and snakes and roadrunners and desert plants and even a very special fairy (!), check out all the books here at elaineapowers.com.