May 8th is the First International Blue Iguana Day!

May 8, 2021 is the first International Blue Iguana Day. Blue iguanas, Cyclura lewisi, are the endemic iguanas on the island of Grand Cayman in the Cayman Islands.

I had the honor of volunteering with this program, collecting native plants and preparing the salad for the iguanas.

This is a story of success for a critically endangered species, which was on the brink of extinction. In 2002, only about two dozen blue iguanas remained in the wild. Currently, the population is 750. Because of the increase in numbers, the blue iguana has been down-listed to endangered. Fred Burton and the Blue Iguana Recovery Program (BIRP), now Blue Iguana Conservation, are responsible for this effort. The effort is located in a conservation facility in the Queen Elizabeth II Botanic Park. About 100 baby iguanas a year are head-started before being released there. 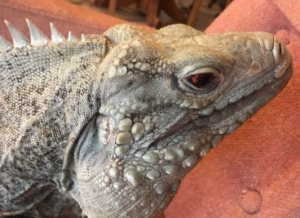 There are several reasons blue iguanas, who exist in one place in the world, almost became extinct. The reproductive rate of these iguanas is very low, and native snakes consume a lot of babies—but those issues are part of the natural cycle.  Deaths due to domestic pets, however, are not and owners must control their dogs and cats, because iguanas don’t know that our pets are a threat to them. As the human population on Grand Cayman grew, habitat destruction and being killed on the roads increased as well. Iguanas enjoy basking on the warm road surface – and cars aren’t recognized as a danger, either.

My connection with the blue iguanas, in addition to donating time and money, is my reptile companion, Blue (pictured above).  Blue is a hybrid blue iguana, Cyclura nubila lewisi, from a cross of the Blue Iguana and a Cuban Rock Iguana.  Since he is a hybrid, he can never be released into the wild.  However, though he is missing the classrooms, he is still enjoying his role as an ambassador for iguana conservation.

Book Note: Perhaps someday I will write a book about Blue Iguanas, but for now, I’d love to show you my book about the endangered Rock Iguana called Silent Rocks. So many species are now endangered, Rock Iguanas being among them. The book can be used to teach how animals in general become endangered and the difference conservation makes.