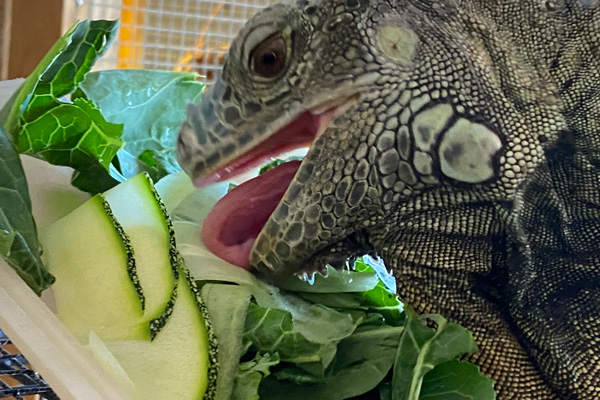 Most of the iguanas in my life have been green iguanas, Iguana iguana. However, not all green iguanas are green. Through the years I’ve cared for green iguanas who were various shades of green, orange, blue, and even one that was black and white. Like any animal, they all had different personalities. Some liked to be cuddled, while others were content to sit on my lap or shoulders as long as I didn’t touch them. Then there were those I called real people-lizards. Those were the ones who enjoyed our visits to schools and senior centers. Still, others were homebodies and preferred to stay out of the spotlight. No matter their coloring or temperament, I’ve found that iguanas are my writing muse.

Years ago, I retired from my job as a laboratory research biologist to become a writer. I quickly found inspiration in writing with my iguanas around me. To soak in their positive creativity, I moved my writing desk into their midst. One Christmas, a friend gave me a baby female iguana from her favorite breeder, who was well known for producing easily socialized iguanas. When a new iguana comes into my life, I like to choose a meaningful name – we humans like to name things. I pondered the ease with which this little green lizard was stimulating my muse, and the moniker Calliope came to mind. Calliope was one of the Greek Muses, the nine sister goddesses who presided over poetry, song, the arts, and sciences. Calliope was the muse of epic poetry. Epic poems are narrative, long poems. Some articles refer to Calliope as the muse of long poetry.

Since many of my books happen to be long poems about scientific facts, Calliope was just the muse I needed. Non-fiction can be written as rhyming poems. I believe it enhances learning and retention of information. Consequently, I think all picture books should rhyme.

During my adventures in writing poetic science, I’ve received comments stating that poetry and science should never be mixed. Then, at a book festival in Chicago, several poets happened to be at my booth as they discussed how non-fiction could be written in rhyme. One of them pointed at my books, turned to the others, and said “See? You can put non-fiction into rhyme.”

Here’s a real-world example. As part of my efforts as a citizen scientist, I create iguana identification booklets. These pocket-size booklets are used in areas in which iguanas, both native and invasive, are common. They teach people how to tell between native and invasive iguana species, but that’s not all. They state where to call for invasive removal and provide tips for protecting their native animals, amongst other things.

Since rhyming is my thing, the text in these booklets rhymes. One of the target audiences for these booklets is dock workers. They are the front line of biosecurity. Unfortunately, green iguanas often stow away in shipping containers and it’s up to the workers to prevent them from getting ashore and out of the port. At first, it was feared that workers wouldn’t like the “childish” rhyming, but authorities soon realized the opposite; rhymes assisted in detailed memorization. It wasn’t long before they insisted upon rhymes.

Calliope Green Iguana has contributed to many books, and I enjoy creating leaves of books while Calliope, a folivore, enjoys the leaves in her food. I appreciate her support as I continue writing long, epic poems which become entertaining, educational picture books.