Morton Salt, Campbells, and Flamingos in the Bahamas. 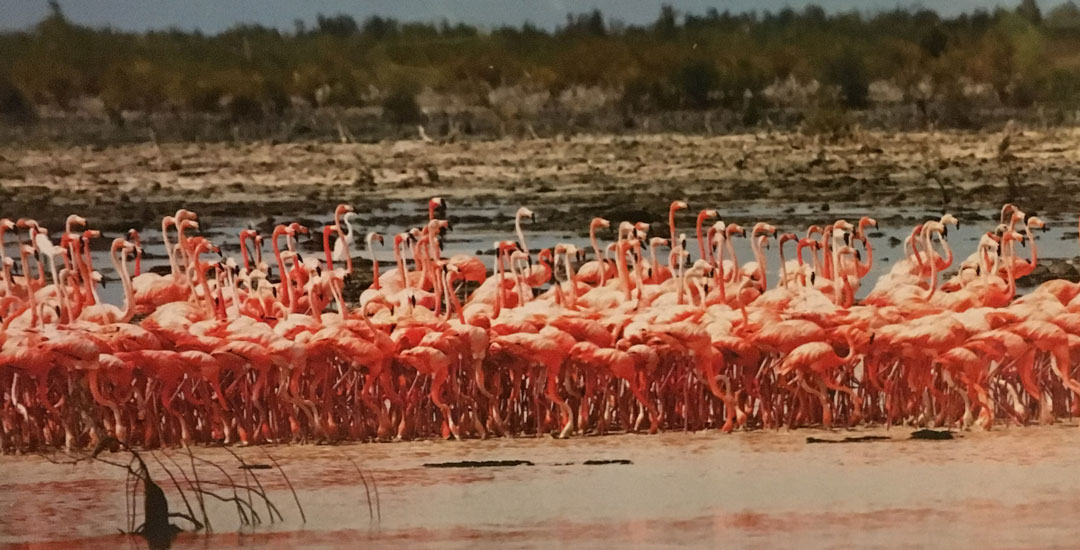 Recently, while in Chicago I happened to see the iconic Morton Salt sign. It’s so huge you can’t miss it. While it’s called a sign, in actuality it’s a roof on the old Morton Salt factory on Elston Avenue. As a child, this sign always reminded me of the Morton Salt Girl and the drawing of her carrying around an umbrella in the rain. I confess, I always wondered what she had to do with salt. If you look closely, you’ll realize she also carried a container of Morton salt that spilled behind her. The marketing slogan was When It Rains, It Pours. It must have been effective, as the company kept her as their mascot and updated her through the years. I even remember her as an animated character on TV!

Animated characters are something I’ve delved into, starting with my character Curtis Curly-tail. However, this time my thoughts drifted not to curly-tail lizards, but the island of Great Inagua in the Bahamas.

For those not aware, I collaborate with the Bahamas National Trust in several of my books. I’ve also given multiple presentations on the benefits of using children’s books in science education. Then there’s the National Trust’s biannual Natural History Conference, which brings college students and teachers together with scientists working in the Bahamas. I especially enjoy checking in with the scientists to make certain my stories contain the most current information.

The Bahamas consists of more than 700 islands, and I try to visit a few more on each trip. My goal is to visit all the inhabited islands and some of the uninhabited ones. One year, after the National History Conference, I jumped at the opportunity for a field trip to the island of Great Inagua. Why was I so excited to go there? Salt. You see, the major industry on Great Inagua is the collection of salt for Morton Salt!

With a dry climate, Great Inagua is perfect for salt production. Operations began in the late 1930s and continue to this day. Believe it or not, the island’s 300,000 acres produce about a million pounds of salt each year! Nature plays an important part in producing this salt. Energy for the drying is provided by the sun and wind. An algal mat in the reservoirs removes impurities. Brine shrimp eat the algae, which keeps the water clean. More importantly, the brine shrimp serve as food for Caribbean flamingos. The Morton Salt facility shares Great Inagua with the Inagua National Park. Established in 1965, the park is the site of the largest breeding colony of West Indian Flamingos, Phoenicopterus ruber, in the world. Once near extinction, the population of The Bahamas’ national bird is now growing.

Along Came the Campbells

On this fascinating trip, I was joined by a gentleman named David George Campbell. When introduced to him by a mutual friend, Sandra Buckner, I was sure I’d remember his name, as I knew a George Campbell when I lived on Sanibel Island, Florida. George was a naturalist and a great inspiration to me. When I worked at the J.N. “Ding” Darling National Wildlife Refuge, George was also there. He kept an eye on our activities and the activities of others in his quest to protect the island’s special ecosystem, and I felt honored to know him. He wrote The Nature of Things on Sanibel. I treasure my copy and suspect he would be saddened by the damage later generations did to the island we both loved.

When mentioning George Campbell to David, I was astounded to learn that George was his father! It was intriguing to learn how intertwined our lives were. David grew up on Eleuthera Island, the location of the Leon Levy Preserve. Meanwhile, I wrote Grow Home, Little Seeds specifically for the preserve. To my delight, David shared that he attended Kalamazoo College. I lived in Kalamazoo while working for the Upjohn Company. In addition, in the seventies, David served as the Executive Director of The Bahamas National Trust. He worked on the conservation of the unique ecosystems in The Bahamas, the same ones I write about in my books. David wrote The Ephemeral Islands, the first natural history of the archipelago to be published since the 1800s. It seems that the islands inspired both of us to write.

It’s a Small World after all

They say it’s a small world and that everyone has only six degrees of separation from each other. The connections between David, George, me, a small island in the Bahamas, and that Morton Salt sign seem to add credence to these ideas. Despite these very diverse places and situations, they are all interconnected in my life.