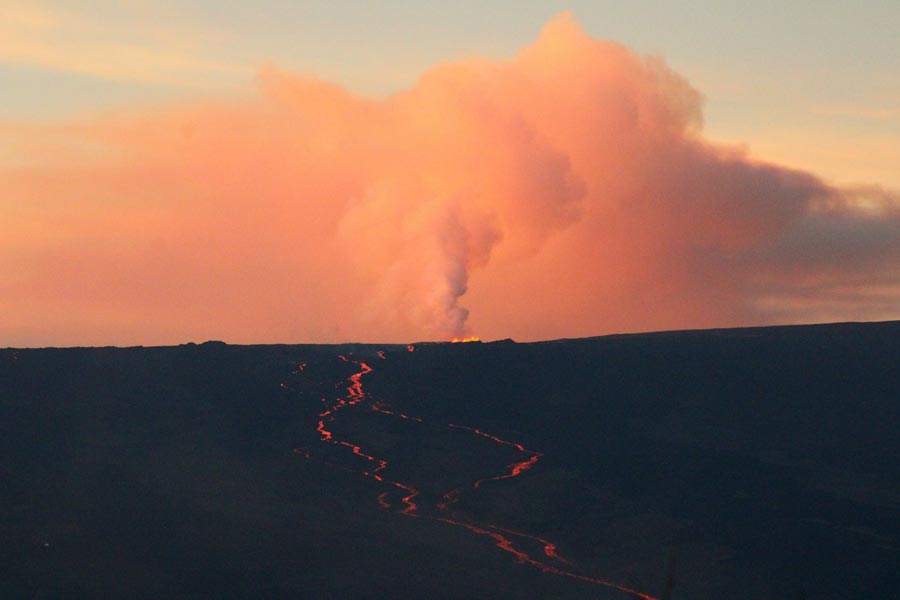 I woke up on November 28, 2022, to the headline announcing “Hawaii’s Mauna Loa is erupting for the first time since 1984.” Mauna Loa erupting always gets my attention. Before 1984, the volcano on the big island of Hawaii had last erupted on July 5, 1975. I know because I was on the side of it when it did! My volcanic adventure was certainly a tale to remember and share…

After graduating high school, I attended a summer science course on the island of Hawaii before starting college in the fall. It was a great trip with visits to the black sand beaches, scuba diving off the coast, making a rubbing of a petroglyph,  walking across the lava field of Kilauea volcano (my shoe soles got really hot!), and camping on the side of Mauna Loa in the Hawai’i Volcanoes National Park campground.

The camping trip was almost canceled because the seismologists had detected 26 separate earthquakes in the previous 24 hours. Something was going to erupt! However, everyone assumed it would be Kilauea, as usual. Many tourists had checked into the hotel that had an overlook of Kilauea, specifically for that reason. Nothing like enjoying a meal as you watch lava splash.

A cabin in the campground had been rented for our group, but when we arrived, we quickly realized that there wasn’t enough room for all of us to sleep inside. No problem, some of us hardier folks volunteered to sleep outside in our sleeping bags. We were quite comfy and the night sky was magnificent.

Around midnight, we saw an orange flame leap into the sky. At first, the flame was thin but increasingly widened across the top of the volcano. Mauna Loa, the world’s largest volcano, was erupting. That answered the question of who was going to erupt. This was exciting because it hadn’t erupted in decades! We, the outsiders, got up and enjoyed the show. Mauna Loa is not an explosive type of volcano, instead, the lava fountains fill the summit caldera, Moku‘āweoweo, and then spills over. Fortunately, the flow usually goes over the other side, so we felt safe in the campground.

We decided we should share this incredible event with the other campers, so we ran around the campground yelling “the volcano is erupting, the volcano is erupting.” Our classmates believed us and came out to enjoy the show. However, the majority of the other campers told us to be quiet (in stronger terms) and didn’t come out. They were rather upset with themselves the next morning when they realized we had been telling the truth. Hey, we tried.

One of the leaders yelled that we could drive to the top! We jumped in the van to go to the top of the volcano where the park service had erected a viewing platform over the summit caldera. However, halfway up, our driver stopped and turned around. We were low on gas and wouldn’t be able to outrun the lava flow if it came our way. Lava flows at 30 mph. People run up to 8 mph. It wasn’t a risk we wanted to take. Our retreat turned out for the best since the molten rock consumed the viewing platform on its way down the volcano’s side. Another 3 feet of land was added to the island that night

Unlike the current eruption, the 1975 eruption lasted less than 24 hours. Starting just before midnight, all activity stopped by 7:30 pm on July 6. After all, we had returned to the school that day, so why would Mauna Loa keep erupting if I wasn’t there?

If you found molten rock as amazing as I do, you might enjoy my downloadable workbook all about rocks!