The Laws of Physics (According to Horses) 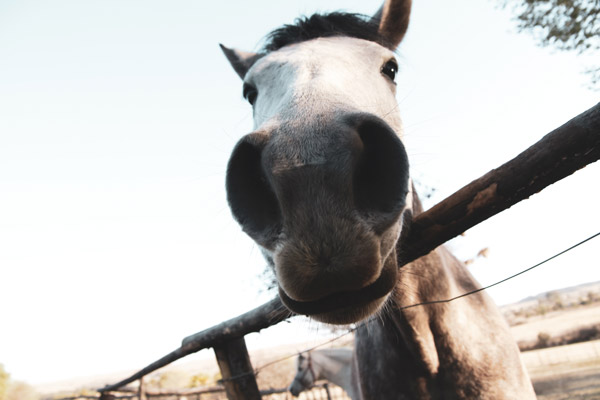 I started horseback riding after I retired. Before that, I’d never been particularly fond of horses, despite being a biologist. I preferred reptiles, crustaceans, and mollusks. However, life has a way of leading me down unexpected trails. Although no matter the trail I find myself on, I always find a little science. Even with a biology major, I had to take physics classes. I particularly liked those that dealt with the physics of living beings. But I still had to learn about the general laws of movement and such. But once I started riding horses, I quickly began thinking about all of the laws of physics.

There’s the obvious law of gravity that I’m reminded of every time I climb on the back of a thousand-pound animal. Should I be jostled off, gravity will without fail take me to the ground. Yet, it’s gravity that keeps me on the horse. By balancing above the horse’s center of gravity, I will stay on her back. Once on board, the laws of motion are very apparent.

First Law of Motion: an object at rest will remain at rest unless acted upon by an outside force. I have to convince the horse to move forward. Sometimes, the horse prefers to just stand. That’s the difference between a bicycle and a horse. Fortunately, most of the time when I ask nicely, the horse will move forward. When the horse moves, I feel my body being thrown back – that’s my body trying to remain at rest. The faster the horse goes forward, say to a canter, the more my body is thrown back. Hopefully, I can remain seated and not thrown completely off the back of the horse! Every time the horse changes its pace, I have to adjust my center of gravity. There’s no sitting passively when on top of a moving horse!

Second Law of Motion: acceleration of an object depends on the net force and is directly proportional to the magnitude of the force, while being inversely proportional to the mass of the object. A rider’s center of gravity is critical for horseback riding. If I’m centered on top of the horse’s center of gravity, we are in balance. I can use my balance to communicate to the horse how I want it to move. By shifting my balance back, gently pulling on the reins and relaxing my legs, this net force moves the horse’s mass to slow down or stop. This also happens when a horse jumps, combining the horse lifting its legs and gravity pulling them back down.

Third Law of Motion: when two bodies interact, they apply forces to one another that are equal in magnitude and opposite in direction. When I’m sitting on the horse, my body is pushing down on the horse (poor horse), but at the same time, the horse is pushing up on me (thank you, horse) with the same amount of force. The reason I bounce in the saddle is due to the force with which its hooves push on the ground, creating the upward force that causes me to bounce in the saddle. Of course, my coming off the horse, being thrown, involves this third law. That’s when the force of the horse is a little more than my force.

To allow me to stay on the horse, friction can help. Holding my legs against the horse creates friction. This also helps keep me in the proper posture. The horse is creating its friction between her hooves and the ground.

Many other aspects of physics are involved in the more advanced riding that I haven’t experienced since I’m a “young” rider. The ones I’ve experienced so far have been sufficient.

I’ve learned a lot since I started horseback riding, horse behavior, my body and its muscles and a refresher course in the physics of motion. Check out my other science based books, with an animal flair. And now it’s time to meet my physics instructors!