Recently, one of my iguana companions died. Ezra, a green iguana (Iguana iguana), finally succumbed to old age. A green iguana, a very common pet lizard, Ezra had lived with me for 20 years after coming to my iguana rescue in New Jersey as a full-grown adult. He must have been at least 5 years old, probably closer to 7-8 years old. We had a special relationship, so I was heart-broken when his end finally came. Green iguanas usually live 15-20 years in the wild, but Ezra was most likely 27 when he passed. A very nice long life for an Iguana. After his passing, I came across an article in Life (23 June 2022) by Clare Wilson. It’s been observed that in captivity, some chelonian species have a lower rate of aging as they grow older. Keep in mind, turtles and tortoises are already known for their long lives. So why is this? That’s exactly what I wanted to know.

Knowing the life spans are important when considering these species for pets. The article described that some species living in captivity have a much slower rate of aging, approaching zero and, amazingly in some cases, a negative value. What? Negative value? Does that mean the reptiles got younger? No, we’re talking about the rate of aging.

Rate of aging refers to the likelihood of an individual’s death the older they get within a population. In most animals this rate increases rapidly as they get older; just think about mammals, such as us humans.

In contrast, some turtles and tortoises when kept in captivity have a decreased ageing rate. Captive care may be improving their longevity.

An interesting characteristic about turtles and tortoises is that they grow throughout their lives. Females produce more eggs the larger they grow. So, living longer enhances their reproductive opportunity.

Of course, none of these animals live forever. Is it the result of reliable food, good medical care and lack of predation and environmental dangers? That’s not fully understood. Or is it something in the animal’s physiology? This information could provide clues on how to increase human longevity. We always seem to bring it back to helping our species.

The Difference with Iguanas 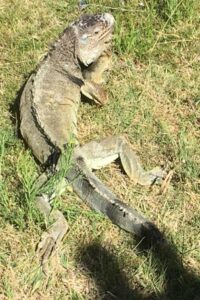 Ezra Green Iguana’s life in captivity was not typical. Most green iguanas kept as pets have a much reduced life expectancy. Within the first year in captivity, 95% of green iguanas die; it’s 99% within the first two years. These are troubling and unacceptable statistics. Iguanas are beautiful lizards with a prehistoric look reminiscent of dinosaurs. Evolutionarily, however, they are fairly new. They are only native to the Americas. I ran an iguana rescue in NJ. I placed Ezra twice. Once to a truly horrifying situation that fortunately I was able to remove him from. The second time was to a wonderful family that wanted to use him for educational talks. However, he wasn’t happy with them. They built him a fabulous outdoor enclosure, but we discovered that he really wanted to live with me. When he was returned the second time, I promised him he could always stay with me and he did.

As a side note, when people came to adopt from me, I made sure the iguana chose the human and not the other way around. I also discovered that I had to leave the room, so the iguana would reveal its true feelings about the adopter and not be reassured by my presence. And people don’t think reptiles can differentiate between humans. But that’s a tale for another blog.

Some reptiles are easier to keep as pets. Green iguanas are not good choices. They require extensive lighting, heating, and enclosures as well as daily fresh food. As prey animals, they defend themselves first and worry about being pleasant later. As I often say, “everything eats as iguana.” It takes about a year of daily interaction to “socialize” an iguana. They will never be tame, but may become an accommodating wild animal. Their human companions must earn their trust.

If you’d like to have a lizard family member, I recommend bearded dragons (Pogona sp.) or geckos (especially leopard geckos (Eublepharis macularius). Look for captive bred individuals – many of them have impressive color morphs. 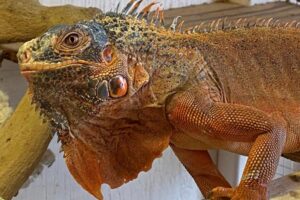 My final thought is that I’m pleased that some turtles and tortoises do well in captivity. We need to ensure that we can say that about all reptiles we take into captivity. Want to learn mre about turtle, tortoise, and iguana conservation? Check out my educational workbooks. Made for children in grades K-8 but fun and interesting enough for the adults too.