What’s So Bad About Algae? 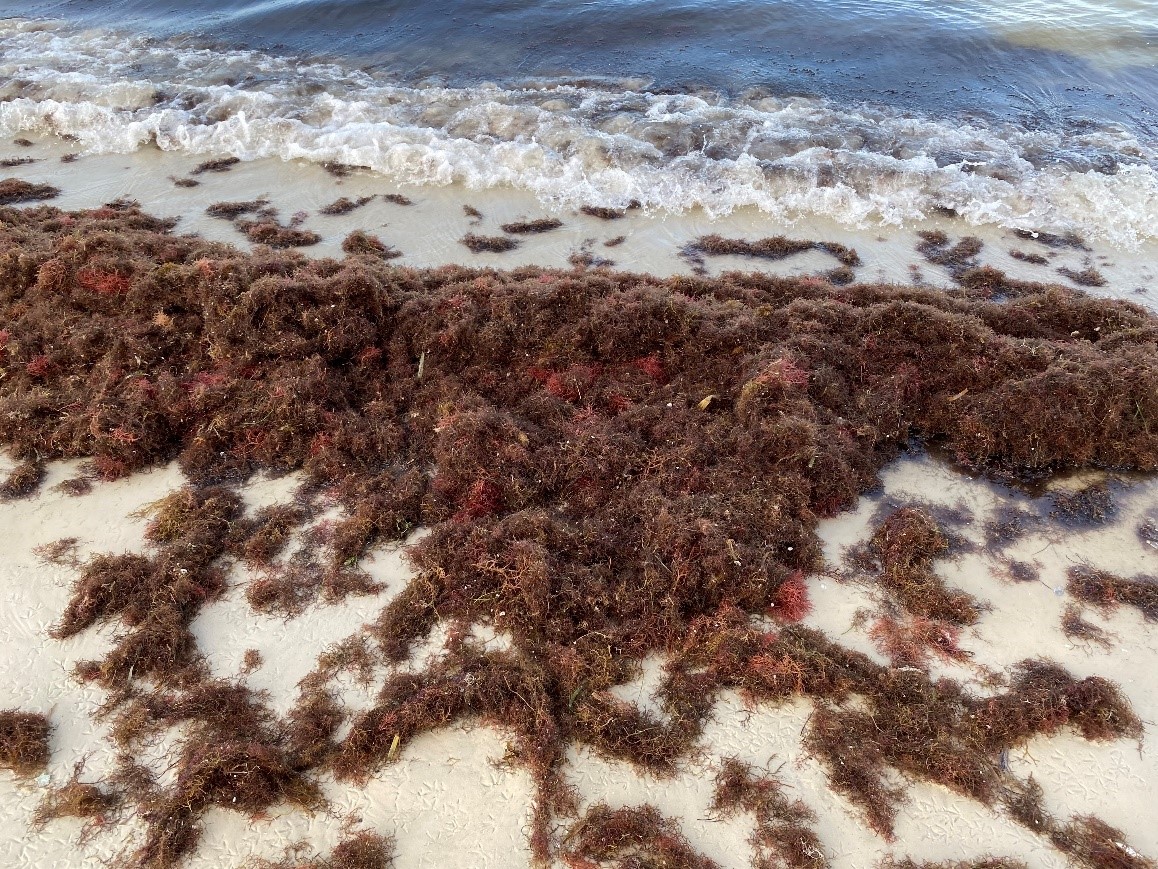 Even though I live in the Sonoran Desert, many of my book’s settings are in areas that have ocean beaches. Often in the Caribbean. These books deal with environmental issues. And with good reason. The Caribbean is one of the world’s most biologically diverse marine regions. That’s why I was concerned to learn about recent algae blooms in the region. Here’s what I learned.

This summer, many islands in the Caribbean are suffering from too much sargassum washing ashore. Sargassum is a brown alga, which, unlike most algae that attach to a substrate, grows as free-floating mats. In proper amounts, sargassum decomposing on the shore provides important nutrients to the coastal ecosystem. The piles also help reduce erosion. Unfortunately, too much washed-up decomposing sargassum depletes oxygen in the water, resulting in fish kills. In addition, hydrogen sulfide gas is released, affecting people. So, the current huge amounts of sargassum are impacting the beaches, preventing sea turtles from nesting, boats from leaving docks, and tourists enjoying the shore.

This is why I was concerned when I saw this on my favorite beach in Florida. Was this sargassum on the shore? Was sargassum clogging the beaches as they had in the past? 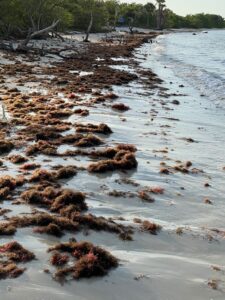 I was relieved when I identified this as Red Drift Algae. Even though there have been times sargassum has clogged the area’s beaches, red drift algae are found in the local inshore waters and this build-up is normal. The algae are frequently found in small amounts along the shore, but recent conditions (high tides and strong winds) have caused higher amounts to drift.

All the Colors of Algae

When seen on the shore, we often call algae, plants found in aquatic environments, macroalgae, or seaweed. Macroalgae are algae that can be seen with the naked eye. Other algae require a microscope to be observed. Macroalgae usually grow attached to sediment. When they detach, they become drift algae. I use the pronoun “they” because algae are plural, and alga is singular. Macroalgae don’t have vascular systems like grasses or land plants. No, they absorb water and nutrients directly through their surfaces.

The various colors of macroalgae are used to divide them into three groups: green, red, and brown algae. Pigments give these plants their colors: fucoxanthin for brown, phycoerythrin for red, and chlorophyll for green. However, you can’t judge an alga by its color. Red algae can be green and brown as well, green algae can be yellow and brown algae can be red or green! This sounds rather complicated.

So, I shouldn’t be surprised by the various colors in the red drift algae on my beach. In addition, the shapes of the algae were different, which made me curious about what species of macroalgae might be in the mix. I used a nature app to try to identify them. 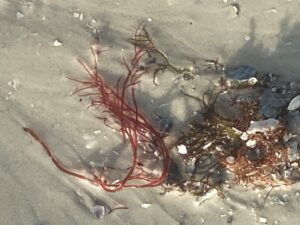 The app couldn’t positively identify this alga but offered some suggestions: genera Ceramium, Laurencia, or Jania. My guess is that it is Laurencia sp., based on its description. This red algae genus is found in temperate and tropical littoral zones. The littoral zone is the area near the shores of oceans, lakes, or rivers. It’s my favorite area of the ocean. 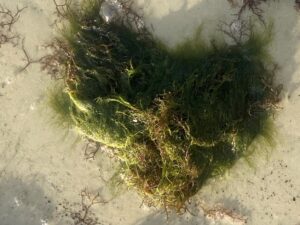 This green alga may be of the genus Ulva, commonly known as sea lettuce. If this is sea lettuce, it is edible by humans and manatees. I’m happy to leave my portion to the manatees. I know they will enjoy it far more than I will.

One alga that seemed easier to identify is this one. It looks just like its picture in the app. Then again maybe not. This genus is usually found in the Pacific Ocean, although there is a species found along the eastern US coast. 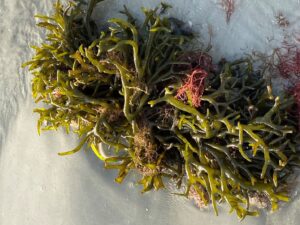 I am not satisfied with the wishy-washy identification of these algae species and will continue my efforts to learn more about them. Their presence on the beaches does impact other animals. Birds and crustaceans have to move around the piles. People find it in the way of their beach activities and unattractive in appearance. Hopefully, this natural occurrence won’t have too negative an impact but provide a beneficial impact on the ecosystem.

If you are interested in learning more about protecting our Caribbean beaches, check out my workbook, Five Ways To Protect Cayman Brac. It’s a fun way to learn about beach conservation!