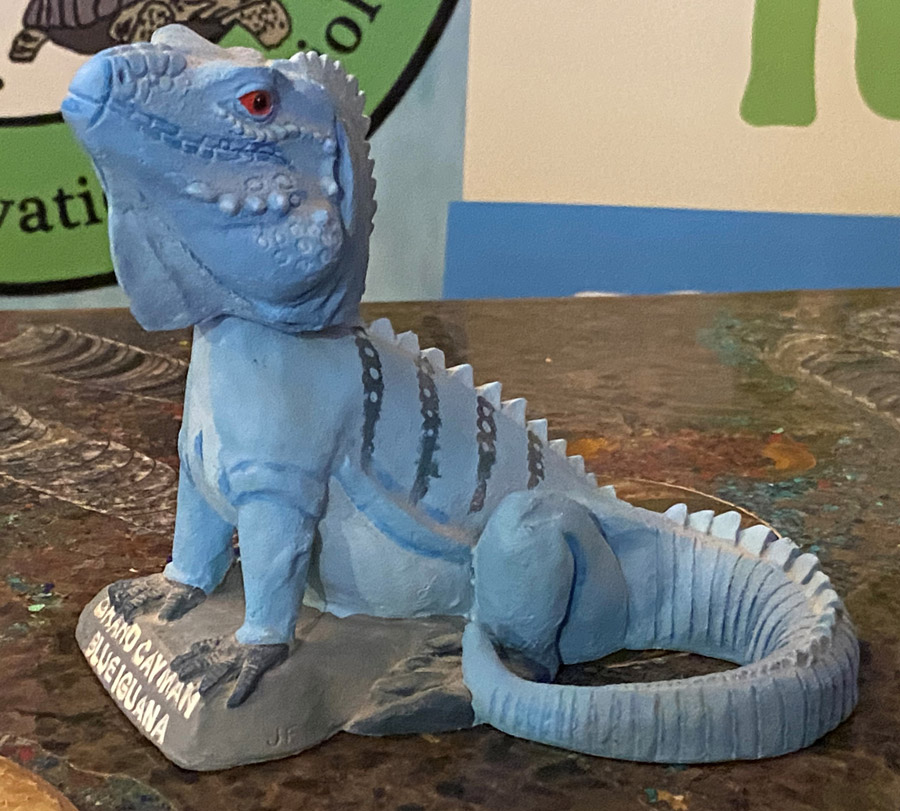 On January 7, we as a nation will celebrate the spring-connected figurines known as Bobbleheads! I don’t remember bobbleheads from my childhood, but now they seem to be everywhere. I see them most often for athletes and teams. I often wonder how significant those figurines will be in the following season. And yes, this topic is a little unusual for my blog. But I just happened to find an unusual bobblehead worth blogging about.

I was stunned when I learned that bobbleheads have been around for more than one hundred years! Bobbers or nodders, as they were originally known, were developed in Germany. They gained popularity in the US in the ‘50s and ‘60s, then again in the late ‘90s when those sports teams used them as promotional items.

You can probably guess by my dismissive tone that I’m not a big fan of bobbleheads. I’m not, except for one, very special, very important and very unique bobblehead. The only worthwhile bobblehead in my eyes is the Grand Cayman Blue Iguana Bobblehead. This amazing figurine was created by Joel Friesch and John Binns.

The Story of the Blue Iguana Bobber

Joel is known for his whimsical artwork that features the Blue Iguana. John Binns, of course, is known for his International Reptile Conservation Foundation. You might also have noticed that he formatted the iguana identification booklets I created to help people tell the difference between endemic iguanas and the invasive green iguanas. I provide the content and he makes them look fabulous!

The critically endangered Grand Cayman Blue Iguana, Cyclura lewisi,has inspired not only this great bobble head, but other marketing souvenirs as well. The bouncing of the head reminds me of the head bobbing by my hybrid blue iguana, Blue, which you see me holding in one of my marketing photos. 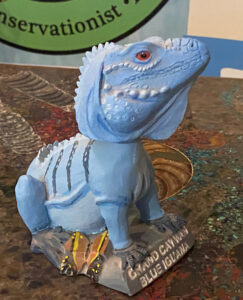 The blue iguana bobblehead was designed to help raise funds for the Blue Iguana Recovery Fund (BIRF). Note the details of the scales on the face and tail, the stripes on the torso and the lovely black hands and feet. The butterfly looks like it was carved from the unique Caymanian gemstone caymanite.

The BIRF provides support of the conservation effort of the blue iguana found on Grand Cayman. This is the only place, the only island, where this iguana species is found. So, blue iguanas are bred to provide juveniles for release in native environments, community education and habitat conservation programs.

Conservation of the blue iguanas only started in 1990; most Caymanians didn’t know anything about their endemic lizard. Then came the invasion of the green iguanas (Iguana iguana), whose population exploded, destroying large parts of the island’s ecology.

Determined scientists and volunteers have brought the blue iguanas back from the brink of extinction. Education programs have introduced their fellow Caymanian to the locals. Visitors are greeted at the airport with a blue iguana statement “His ancestors have been here for 2 million years.” Perhaps these large lizards were mistaken for caimans by early European explorers, who gave the islands their name. Modern-day tourists are encouraged to meet the blues at the Queen Elizabeth II Botanical Park. They are a remarkable color of blue.

Although I have authored children’s books and workbooks on Iguanas in general, I haven’t written any books about the blue iguanas. I have created identification booklets to help people differentiate between the magnificent blue and the invasive green iguanas. I’m honored to do my part for their conservation.

For more on the blue iguanas at www.blueiguana.ky