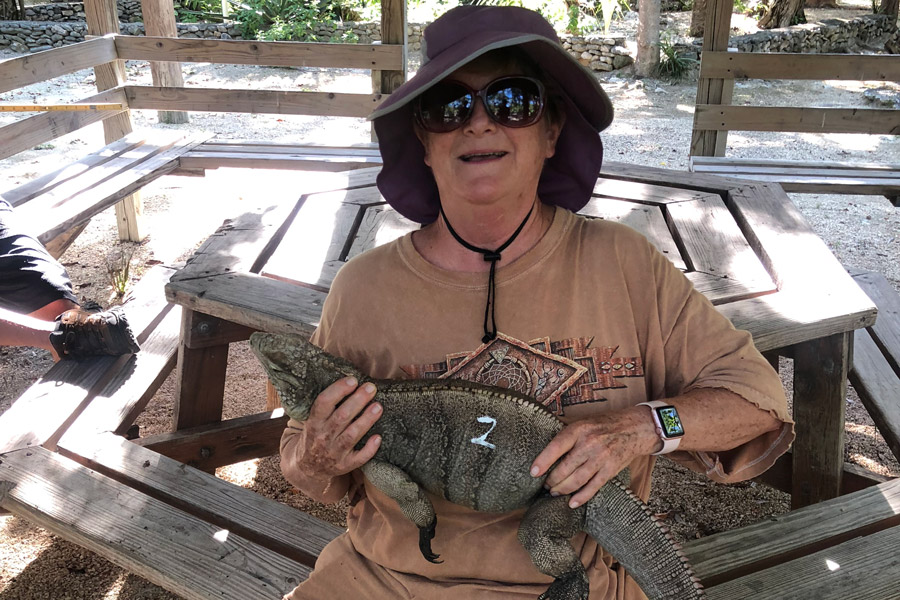 March is an important month for women! Not only was March 8th International Women’s Day. But it’s also HerStory Month, otherwise known as Women’s History Month. It is important to celebrate the vital role of women in American history for the entire month of March, not just one day. Learning about HerStory Month, got me thinking about my story as a woman in both science and the arts. I’ve written previously about some of the challenges I faced in my career, but this time I’d like to share some favorite and little-known highlights. Come celebrate HerStory month with me!

The Beginning of my HerStory

One of my favorite (non-science) accomplishments was helping to found the Hunterdon Radio Theatre. They produce New Time radio scripts in the style of Old-Time radio. My storytelling began with creating audio scripts, which are very different from writing stage theater scripts or books. All the information needed for the story is presented orally. Writing for the ear is much more difficult than for the eyes. The ear is unforgiving of “dead air” or incorrect sounds. And it can ruin the whole story for some! I remember listening to a police procedural where an officer enters his boss’ office. I heard the appropriate sound of the door opening and the background sounds becoming louder. As the dialog began, the background noise became quiet, but the door never closed. Instead of listening to the dialog, I was concentrating on the lack of the door closing sound!

Many of my theater scripts were performed live. One, the Shrine of Seven Iguanas, was actually recorded. I bet you can guess how many iguanas I had in my home at that time (the script title is a clue). Noel, my first iguana, was used as the model for the cover. 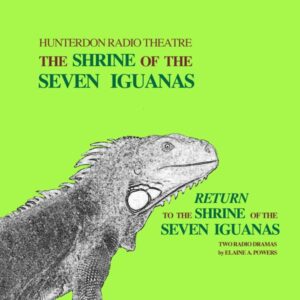 When I moved to Arizona, I transitioned to writing my science-based picture books. One of my books is set on the Bahamian island of Eleuthera. A local artist, Monique Carroll, had created magnificent illustrations for the island adventure. She invited me to join her at a local art festival where we could market the book. The festival organizers had set up a blank canvas that the artists were encouraged to paint on. But after an hour, none of these wonderfully talented artists had applied any paint. So, I, with my very limited painting talent decided to get things going. I painted a couple of green swipes to create a sprouting plant since my adventure tale featured seeds. Those few swipes were all the impetus that was needed. No longer an intimidating blank canvas, the artists’ creativity was released and a masterpeice was created! And even though, many more layers of paint were added, my little starting sprout was still visible. 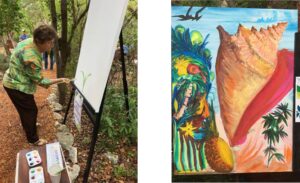 In the past few years, I’ve taken up horseback riding, in kind of a big way. I was never particularly interested in horses as a child or even as an adult until I retired. However, I had liked the idea of riding animals, all along. Before there was this: 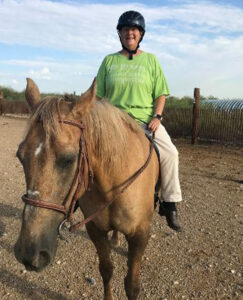 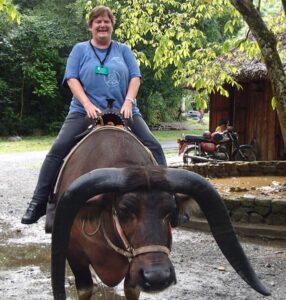 Growing up, I wanted to be a naturalist, sharing my love of nature with others as well as conserving it. However, life took me into laboratories, where I worked as a research biologist. I did wander out to help with conservation outdoors. I volunteered to travel to the Caribbean to work on rock iguana conservation. No lying on the beach for me. No, I was chasing, large lizards over limestone karst, through thorny bushes. 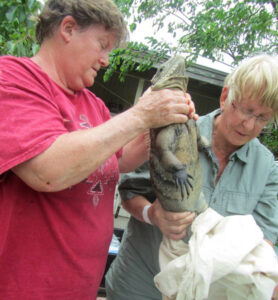 Here I am with my friend, Jill Jollay, “processing” a rock iguana. We would take measurements, including weight, which was done by putting the iguana into a bag of known weight. This fieldwork introduced me to the people associated with the National Trust of The Bahamas, and subsequently, the Cayman Islands. Together we realized the potential of the books set in the islands to educate children and adults about important conservation topics. And a personal highlight, interacting with these incredible creatures resulted in me getting a rock iguana of my own to join my family. 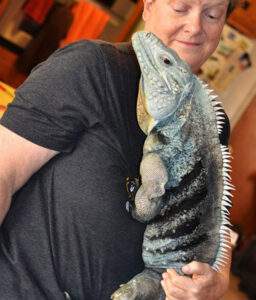 This is Blue, a hybrid Grand Cayman Blue iguana. He is the star of my in-person talks to groups.

My love of iguanas led to my starting an iguana rescue in New Jersey. I was on “speed-dial” for many agencies because I always answered the phone and I always made room for any iguana whose life was in danger. I had up to 26 iguanas in my house at any given time. 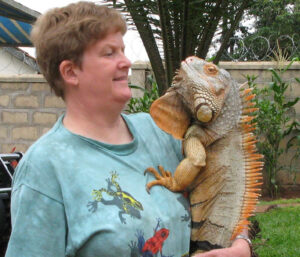 This is Eddie, who spent a year with me while his mom was in Tanzania. When she moved to Uganda, Eddie was allowed to join her. Eddie remembered me when I visited him in Kampala. 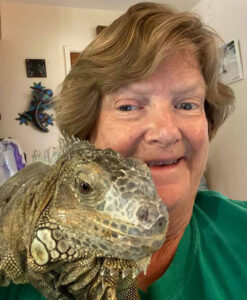 This is Calliope, named for the muse of long poetry.

I hope you’ve enjoyed this little bit of my HerStory and are encouraged to make your own history. To learn more about me and my current goings-on please sign up for my newsletter!